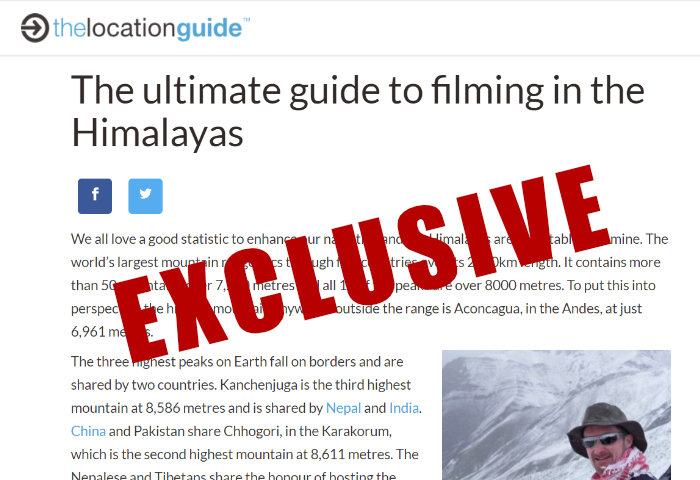 Murray Ashton the Founder of The Location Guide asked Tony Cordeaux from Himalaya Film Services if he would like to write an article for them. Tony's article, 'The ultimate guide to filming in the Himalayas', was published in May 2018. Here is the introduction...

"We all love a good statistic to enhance our narrative and the Himalayas are a veritable gold mine. The world’s largest mountain range arcs through five countries over its 2400km length. It contains more than 50 mountains over 7,200 metres and all 14 of the peaks are over 8000 metres. To put this into perspective the highest mountain anywhere outside the range is Aconcagua, in the Andes, at just 6,961 metres.

The region’s glaciers contain so much water that the Himalayas are often referred to as the ‘Third Pole’. A staggering 1.4 billion people rely on the mountains for their water supply, that’s over 18% of the world’s population. They feed Asia’s ten largest rivers and much controversy as sources are being dammed and diverted, fuelling political tensions among regional neighbours. According to Guinness World Records, the Kashmir region is the world’s most militarised zone with over one million troops stationed either side of the ‘Line of Control’ every day.

The Himalayas have so much more than impressive statistics to offer filmmakers however. They include an incredible diversity of mountain locations from huge snow-capped panoramas, alpine forests, meadows and streams to high altitude deserts, plateaus, glaciers and vast azure lakes. They are equally culturally diverse with communities from the Muslim, Sikh, Hindu and Buddhist faiths, alongside so many tribal communities it would be impossible to list them all."

You can read the full article on The Location Guide site... https://www.thelocationguide.com/2018/05/the-ultimate-guide-to-filming-in-the-himalayas/#

Or, you can download the guide to keep from us here... http://himalayafilms.com/wp-content/uploads/2019/07/Shooting-in-The-Himalayas-Guide.pdf

Please don't hesitate to contact us for any further information or advice regarding shooting in the Himalayas.